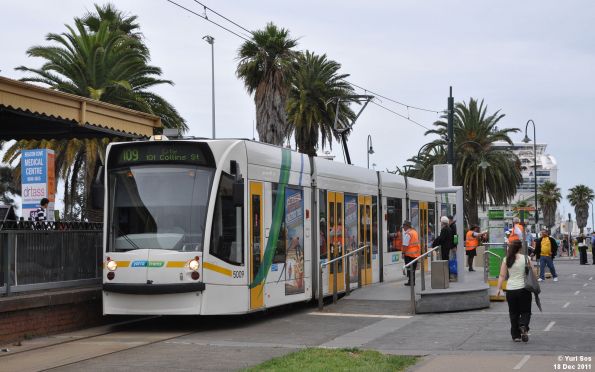 18-Dec-2011: The cruise ship season is in full swing in the Port Of Melbourne with a ship in port every few days. This year, Yarra Trams has risen to the occasion by providing extra shuttle trams from Beacon Cove to "ferry" passengers from the ship into town. Today the "Diamond Princess" was in town.

I happened to be at the Food Store and noted great excitement as a W rolled into the terminus....... reversed and promptly rolled out again, much to the audible disappointment of the waiting passengers from the cruise ship. The tram following the W was perhaps an even more unusual visitor to Beacon Cove - a Bigbino (Ws on test and training runs are not uncommon visitors to Beacon Cove). A quick dash home to grab my son's camera and a sprint back to Beacon Cove to catch the unusual D2.5009 about to depart Beacon Cove for an even more unusual destination: "City 101 Collins St". The "Diamond Princess" is visible in the background. (But shouldn't the route number be "109a"?)

And here's a thought for Yarra Trams: how about a couple of Ws, say a CC one and a green one to roll down to Beacon Cove for the cruise ships and run them to say 101 Collins Street? Just pick a green one without rotting wood. This would be a great ad for Melbourne and attract a great deal of interest. Add a few YT people on board to describe sights of Melbourne that can be visited by tram in the 15 minute journey into town. In the afternoon/evening the passengers can then catch a modern plastic caterpillar back to Beacon Cove.